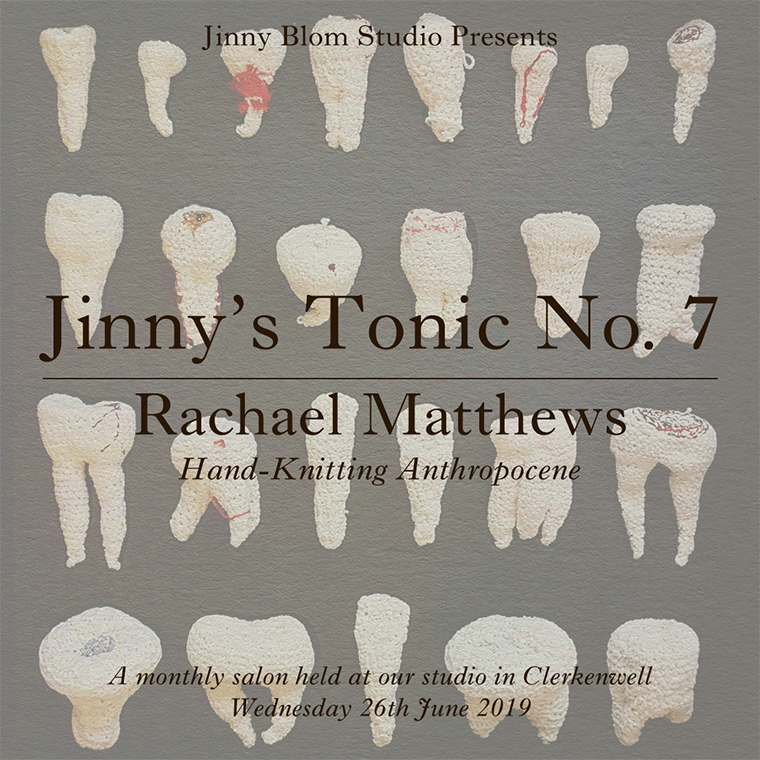 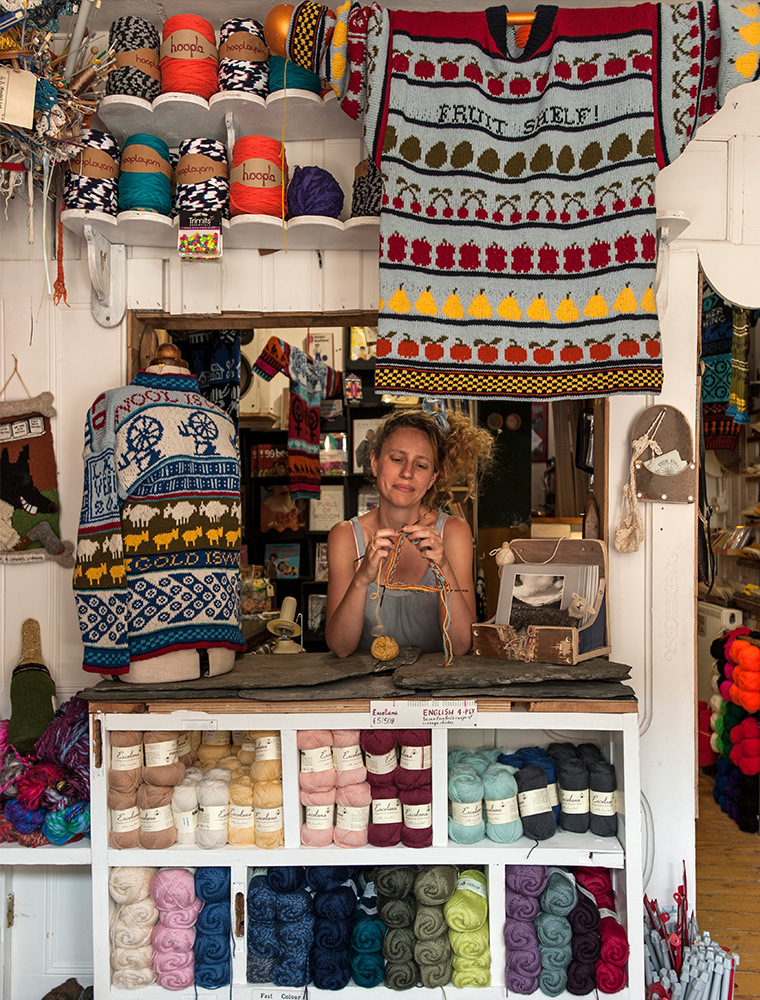 A compulsion to hand knit in odd moments, using otherwise wasted time as an opportunity to create her own clothes taught Rachael that knitting in public can open up deep conversations with strangers. Hand knitting can be loaded with emotions; inherited skills are treasured, family relationships complex, and our projected image of what we want to make often so different from what we end up producing. Rachael finds these subjects as interesting to research as the knitting itself.

The challenge of making a living as a professional hand knitter in London pushed Rachael to open Prick Your Finger, an ethical yarn shop and exhibition space which was open for consultation 5 days a week. The shop grew out of public textile projects and a concern for demoralised British fibre producers. Through running Prick Your Finger, Rachael was assured that creativity is an inherited, unstoppable, and empowering force that naturally waxes and wanes in communities and in the individual. It can never be crushed by the attitudes of society, industry or governments.

After eight years, Rachael closed the shop to write ‘The Mindfulness in Knitting’, published in 2016 by Leaping Hare Press. The book grew out of many conversations and Rachael’s tricky relationship with her work. Rachael currently teaches knitting at Central St Martins and is visiting artist for East London Textile Arts. Rachael’s solo studio practice includes knitting sculptures and expanding on her writing. 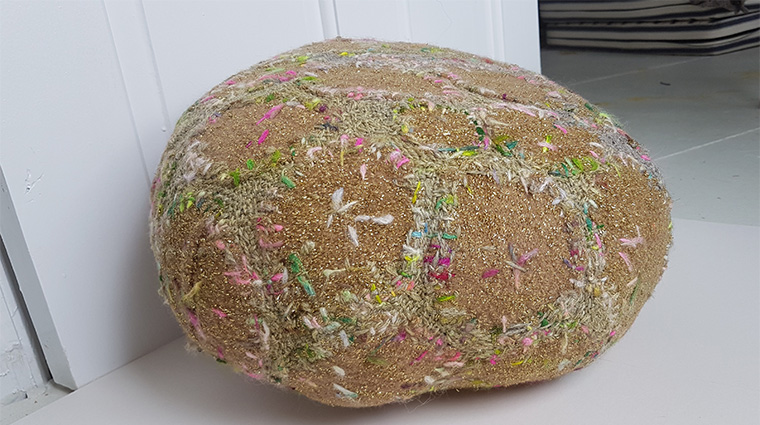 The Anthropocene is a concept describing the ‘current geological age, viewed as the period during which human activity has been the dominant influence on climate and the environment.’

Sometimes hand knitting feels as though it takes an ‘Age’. Through the slowness of knitting there can be geological-like shifts in our thinking. At Jinny’s Tonic No.7, Rachael illustrated these shifts with stories of public knitting and current project ‘ROCK!’, which considers how modern fibres return to the earth.

Rachael brought her bag of knitting, and a selection of finished projects and sculptures. She describes herself as a textile artist, but working with attitudes. We were shown the contents of Rachael’s knitting bag, which was “stuffed with history” – her nan’s toe of a tight, jeans made from her grandad’s nightshirt, a Marks & Spencer jumper she is “trying to fossilise”.

She pulled out a faded, raggedy flannel that belonged to her father. It was a perfect representation of the stories that fabric can tell. It had been scrubbed against her father’s face so often and so vigorously, that there were barely any threads joining the flannel together in the middle. Overused or over-loved, a piece of towelling can evoke so much of a person.

Rachael told us about when she sat through a lecture at Imperial about particle physics. When she spoke to the lecturer about the flannel he remarked “genius! You’re making reference to the cosmic foam!”

Rachael is fascinating and hilarious to listen to. You can almost see ideas sparking off her, and the evening’s conversation went to many places. Here are our best efforts to weave together the strands…

We were told about the beginning of her textile career – producing work in an industrial roundhouse with dyes from plants and a handmade loom, influenced by visits to stone circles. Rachael’s work often focuses on heritage, more recently traditional rope making and knitting folk songs at Cecil Sharp House. 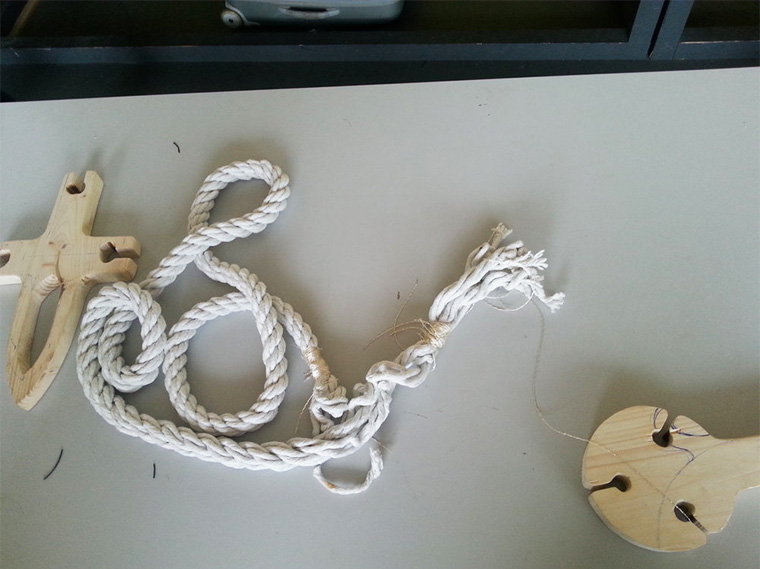 Living and working in East London during its creative peak in the early noughties meant that knitting intertwined with music and art. Rachael sold guitar-shaped bags to Shoreditch’s rock ‘n’ rollers and DJed in nightclubs (taking her knitting with her, of course). 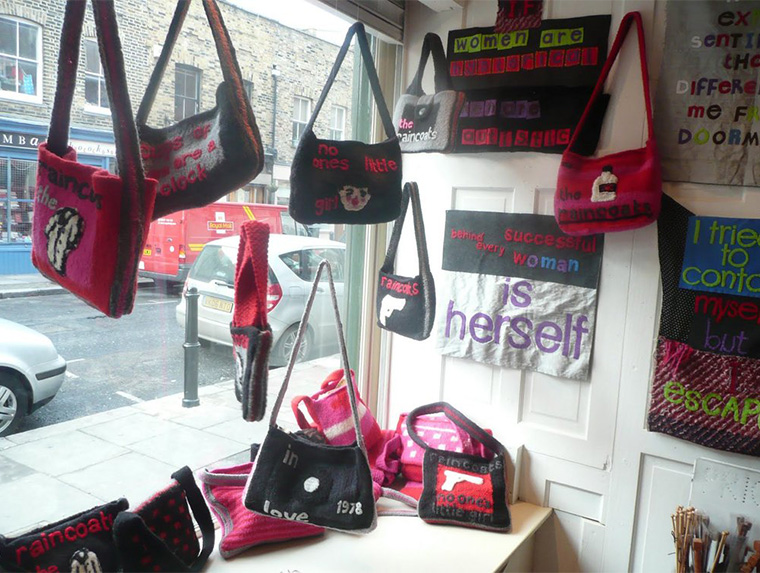 We mused on knitting’s place in the “scene” – it had become cool, and the press caught on. Suddenly there were knitting clubs on the tube, knitting magazines. Rachael was knitting with cassette tape, and joined feminist music and art ensemble Chicks on Speed to knit live on stage. 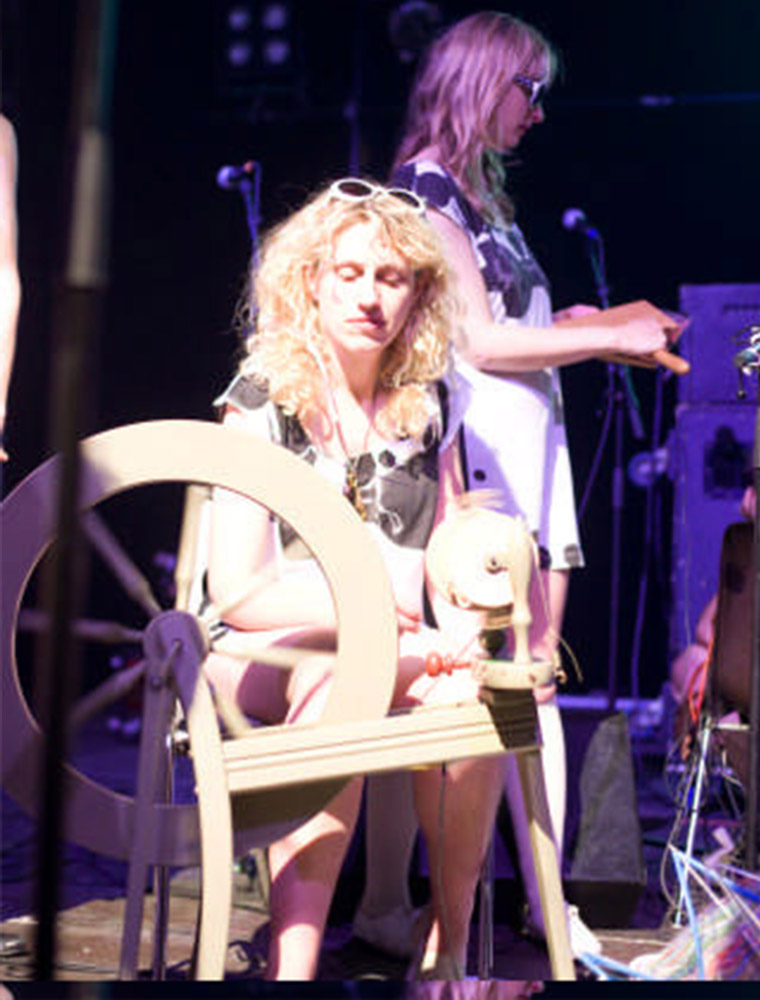 Rachael on stage with Chicks on Speed.

This explosion in interest meant that journalists would open up to Rachael about what they used to make. The sharing of stories and of knitting is a recurrent theme in Rachael’s practice.

Rachael spoke to us about several community projects she was involved with at that time – a massive blanket with a whole Dylan Thomas poem knitted into it, the Brick Lane HEBA Women’s Project, knitting teeth to help adults with learning difficulties overcome fear of the dentist. 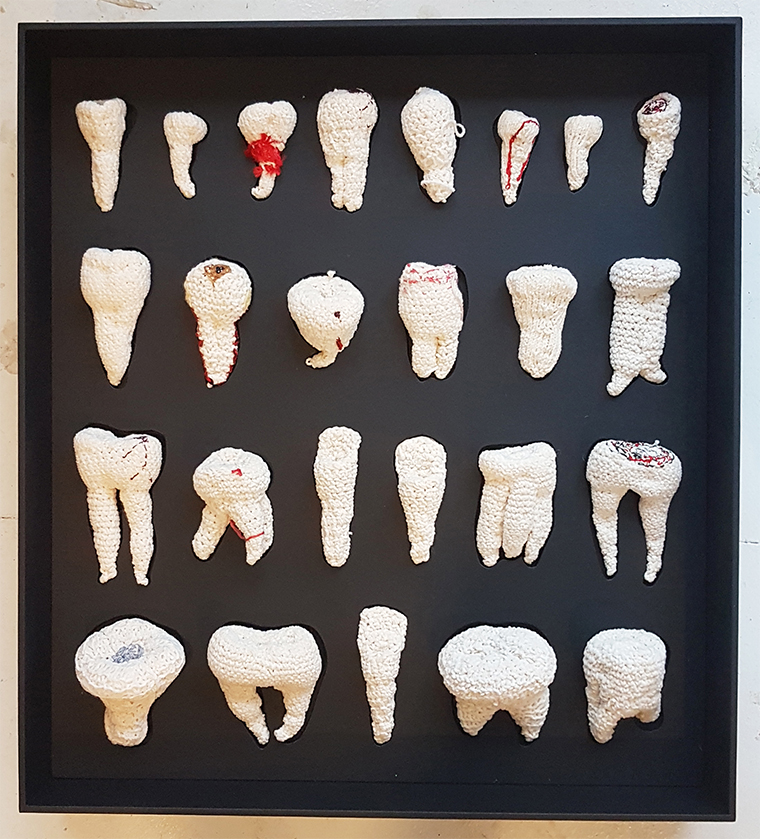 The knitted teeth, with fillings, plaque and pain stitched in. Presentation box by Wyvern Bindery.

“I’m starting to get full circle with the universe”

Rachael’s current project ‘ROCK!’ stemmed from her reading of Jacquetta Hawkes’ 1951 novel ‘A Land’. The image Jacquetta sought to evoke, in her own words, “is of an entity, the land of Britain, in which past and present, nature, man and art appear all in one piece.” 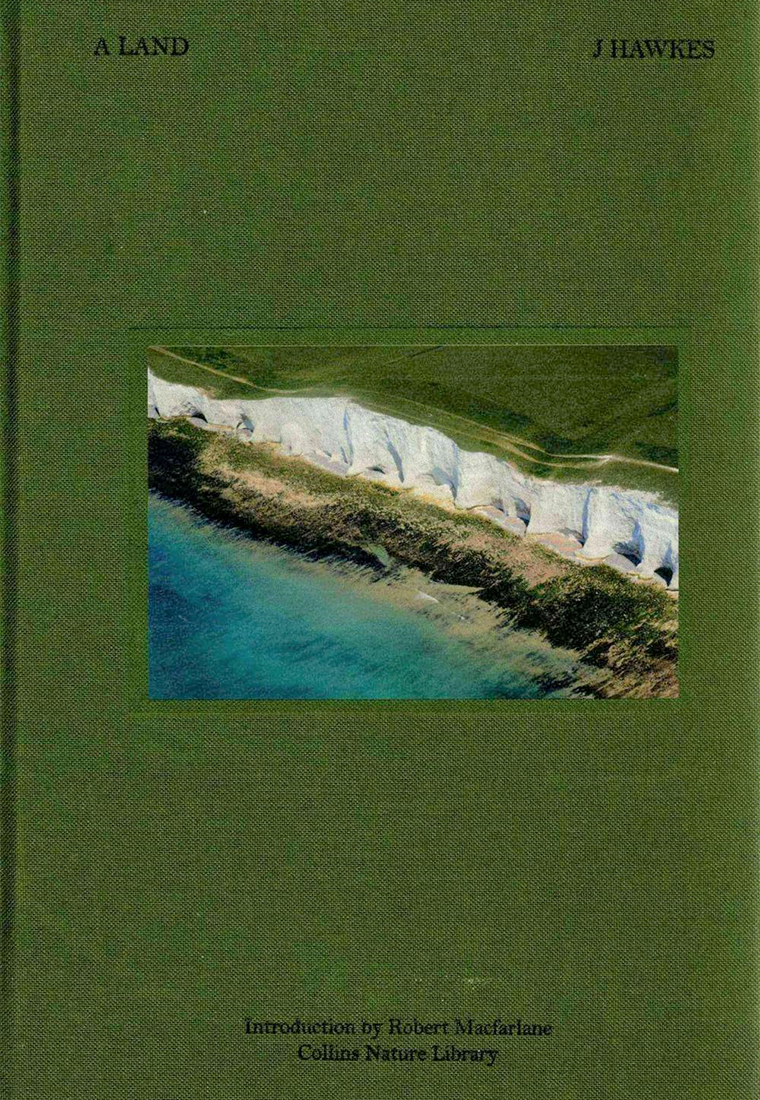 The Collins Nature Library edition of ‘A Land’, a classic piece of British nature writing.

‘A Land’ was mostly shunned by archaeologists at the time; it was not deemed scientific enough. It has come to be respected as a piece of “archaeological imagination”, opening up interest in the field by way of its flirtation with the literary and art worlds.

We spoke about connecting to one’s history through inheriting the family sewing basket, inheriting wool. Rachael grew up in the Lake District, describing herself as from an ancient family but also as an East End girl. Her grandmother was a keen lacemaker, and others in the family were builders.

We discussed the repetition and rhythm of knitting. How repetitive tasks, whether creative or menial can transcend a person, or a group. There is a community rhythm in knitting circles. An unspoken communication. 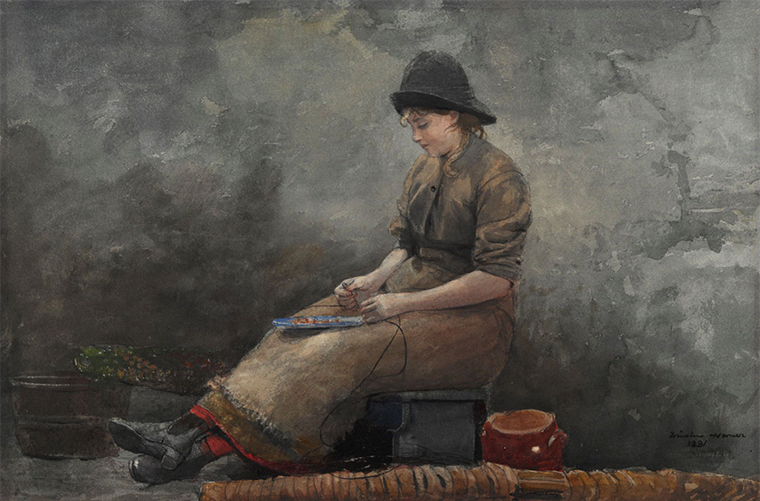 Winslow Homer travelled from Massachusetts to North-East England in 1881 to study J.M.W. Turner’s work. Homer’s resulting work included a series of watercolours painted in the traditional fishing community of Cullercoats, Tyne and Wear. Women of Cullercoats were as vital to the fishing industry as the men out on the boats. Hauling and cleaning fish, and mending and preparing nets and lines. 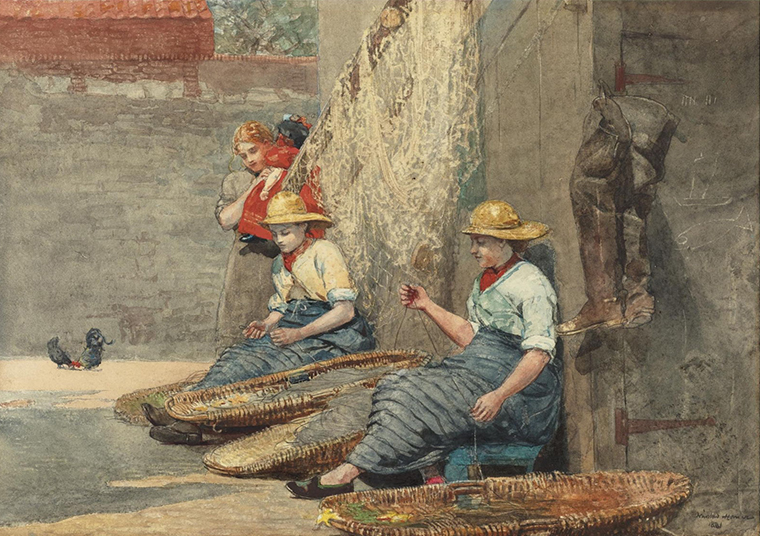 The documented songs of fisherwomen from the Hebrides to Yarmouth remind us of the connection between communal work and rhythm. 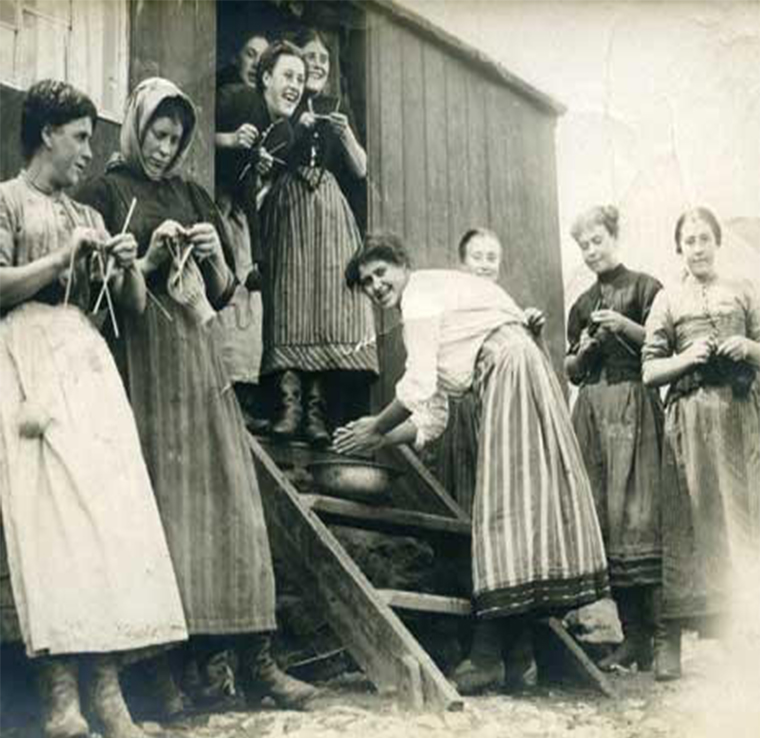 Herring lassies of the late 1800s knitting in their free time.

Knitting was an important part of the herring lassies’ lives, and through their journeys following the fishing fleet from Scotland to Norfolk they would pick up new knitting patterns. 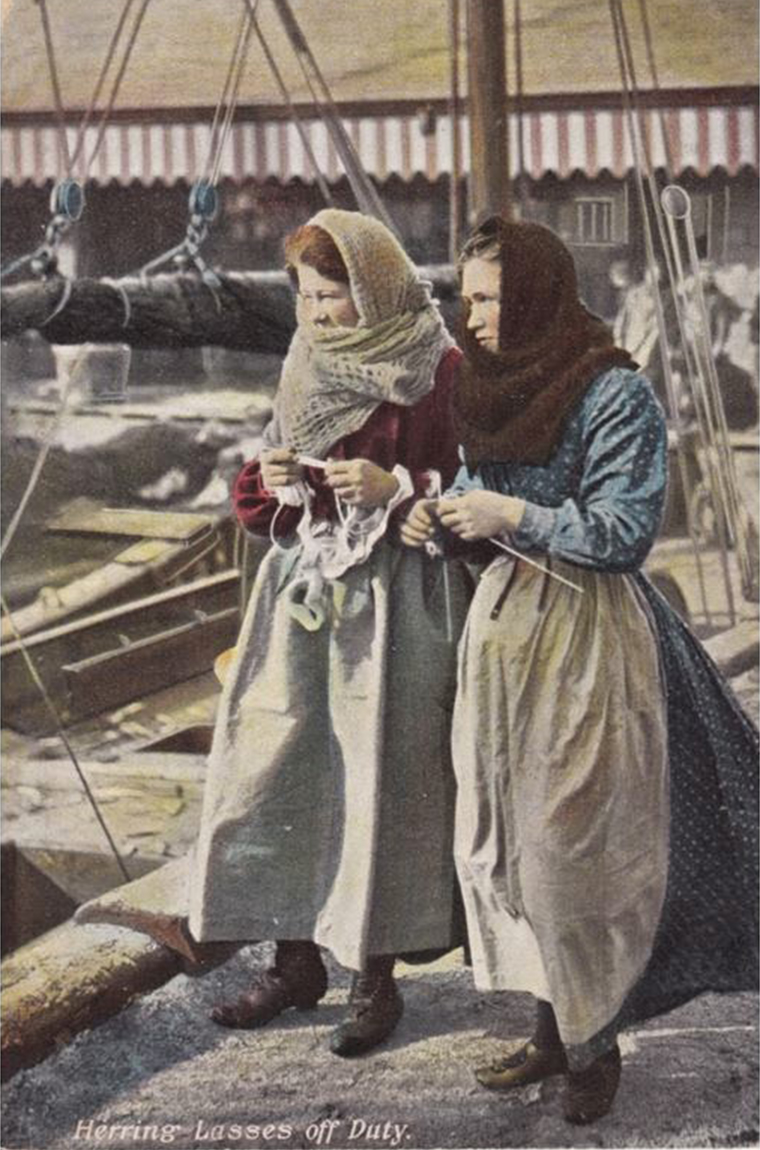 “Knitting a geology is reawakening what I’m seeing in the world”.

Rachael told us that her rocks are starting to be made to music. Her book was called ‘The Mindfulness in Knitting’ but she is now interested in the mindlessness of knitting, that is the state of flow one can enter when knitting. As Rachael finishes her knitting she is not fully conscious of how she did it. 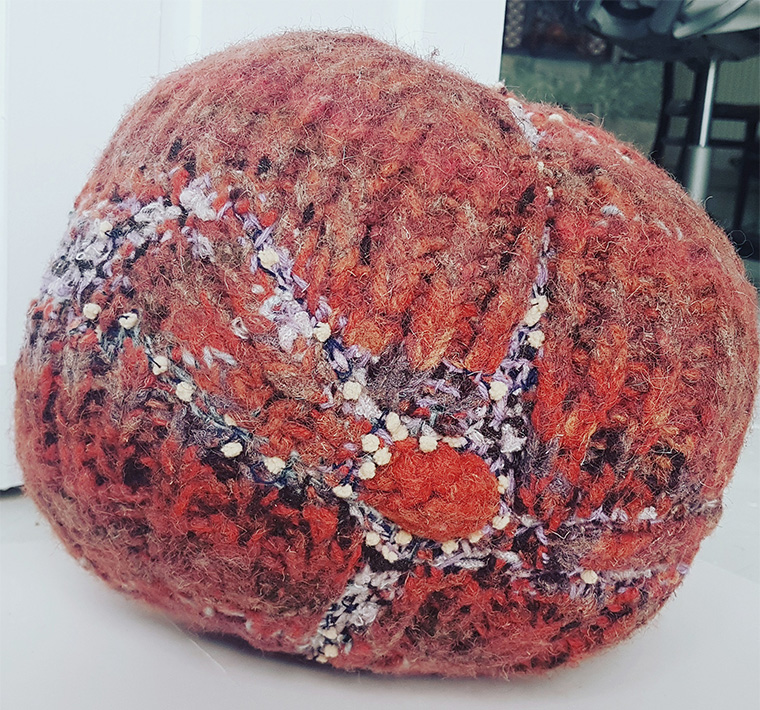 Rachael spoke of a synaesthesia between colour and music. Sometimes she buys a bit of yarn just to hold that colour. Rachael also collects fabric scraps, and once found a bullet in the sewing basket.

Knitting has a special place in textile production as there is no waste – you don’t cut away. If you make a mistake, you undo and reknit. It is also a skill that is most often handed down, or shared. One guest of the evening, a teacher of garden design said “one of the nice things about teaching is you really go into and have to understand what you do. It can help you to understand yourself better.”

We mused on making as a vital part of life. To create is a way to make sense of oneself and one’s impact on the world.